During Bill Maher’s October 3, 2014 program Real Time (on HBO), he and his guest Sam Harris got into a now well-known and heated debate with actor Ben Affleck over mainstream views in the Islamic world. The way in which the debate was framed was whether or not Islamist radicals represent only a fringe movement within the Islamic world (Affleck’s view), or something more significant (Maher’s view). In this context, Maher and Affleck argued over whether or not Muslims, in general, hold what Maher described as “pernicious beliefs.”

A specific belief Maher highlighted was that a majority of Muslims (all Muslims, not just “extremists” or “radicals”) would support killing someone who left Islam, to which Affleck responded:

“I can show you a Pew poll of Egyptians–they are not outliers in the Muslim world–that says like 90% of them believe death is the appropriate response to leaving the religion.”

According to some disturbing poll results from the Pew Research Center, Maher may be right. Pew’s 2013 Religion and Public Life Project, which involved expansive and comprehensive polling of the views of Muslims on a number of issues throughout the world, found the following result among Muslims who support the implementation of sharia law in their home countries (representing large majorities in many Islamic countries) on the question of Muslim apostasy (abandoning the Islamic faith).

86% of Egyptians support executing those who abandon Islam.

This isn’t an outlier, apparently, as Pew’s similarly comprehensive 2010 poll found similar results, with 84% favoring death for those that left the Islamic faith.

So Maher was a small bit off his 90% claim, with only 86% percent responding accordingly, but he was right that a significant majority of Egyptians support killing those who leave Islam. This is a stunning finding, as Egypt is a major U.S. ally and is perhaps one of the most heavily visited tourist destinations in the world. In the eyes of many westerners it is one of the leading historic Islamic states, yet its population is among the most radical or extreme on this issue. One could only imagine the concern if the populations of a historically Catholic country like Ireland or a majority Protestant nation like the United States held similar views. By any definition, most Muslims in Egypt hold an apparently mainstream view on the issue that is identical to that of groups like ISIS or Boko Haram.

But Maher’s claims went beyond just Egypt, to include all Muslims, worldwide. Certainly a large number of respondents to Pew’s poll in other Muslim countries (20 polled in all) do fall in line with Egyptian views that apostates should be killed, to include Jordan (82%), Afghanistan (79%), Pakistan (76%), the Palestinian Territories (66%), and Malaysia (62%). A high percentage of the populations of other countries, although not a majority, nevertheless show alarmingly high rates of support for the killing of those who leave the Islamic faith, including Lebanon (46%), Bangladesh (44%), Iraq (42%), Tunisia (29%), Thailand (27%), and Tajikistan (22%). The populations of the remaining nations polled show approval rates ranging from 18% to 4%.

Do these numbers add up to a majority of all Muslims?

A glance at the statistics provided by Pew (by region) suggests that the numbers may well average out to a majority of Muslims (at least among those that support the implementation of sharia law) in the Middle East, North Africa, and South Asia supporting the killing of those who leave Islam. But without a careful statistical analysis of the most up-to-date populations estimates for each country- not only in total inhabitants, but broken down by religion as well- we can’t be sure. Indonesia, for example, is the most populous Muslim nation in the world, with well over 200 Million Muslims, yet only 18% support killing apostates. Moreover, in Russia and Eastern Europe, there are only minorities who support the practice. So the numbers, by the time we consider these issues for with every country in the world with a significant Muslim population and average them out, would involve a tricky calculations to be precise, one I am not up to attempting at the moment. So let’s just agree that whatever the final numbers are, a majority or not, the overall numbers are disturbingly high. Indeed, although I noted that “only 18%” of Indonesians (for example) support killing those who abandon Islam, this means that around 40 million people there favor the idea.

Why would so many Muslims ultimately support the idea of killing those who leave the faith? As the Pew poll points out, certain Hadith (an authoritative source in the Islamic world that claims to recount the sayings and deeds of the Prophet Muhammad) call for the punishment. See Sahih al-Bukhari 52:260 and 83:37.

Maher’s right. Some extreme views (see also the Pew results on the issue of stoning adulterers below), like the one considered here, are not held only by a few fringe militants, but are depressingly mainstream in some important parts of the Muslim world. 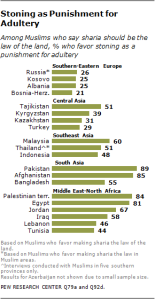