Regardless of the debate over the broader merits of the plan, when I first heard about the controversial recent deal by the U.S. and other countries with Iran, lifting sanctions on Iran in exchange for a suspension of their nuclear efforts, I immediately thought of how ISIS (e.g. “Islamic State”) might factor into this.

ISIS currently controls a land mass between Iraq and Syria larger then Britain, including a population of roughly ten million people, and have spread their reach in significant ways into Libya, Egypt, Nigeria and many other places through those who have pledged their loyalty to its self proclaimed Caliphate. They have also, through the use of social media and their extensive online efforts, been able to recruit tens of thousands of foreign Muslims to join them in Iraq and Syria and many others who remain in their home countries but provide material and moral support. The U.S. State Department estimates that supporters of ISIS, tweet, post on Facebook, and engage in online forums from 90,000 to 100,000 times a day. 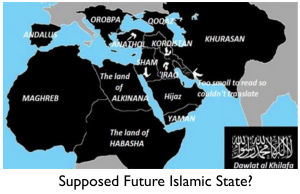 (Above R.) Map of the regions in Iraq and Syria under the direct control of ISIS (Above L) Map showing the broader territorial aspirations of ISIS.

Part of the reason that ISIS generates so much support is that they control so much land, an important component of their claim to legitimacy for their caliphate. This is a problem because the U.S. and others do not have the desire for a massive ground war to dislodge them and regional Muslim countries who oppose their claims do not have the firepower. One of ISIS’s biggest enemies is Iran. While Sunni inspired ISIS has carried out brutal persecutions of Christian and Yazidi minority populations, they focus on Shia Muslims for the majority of their atrocities.

(Above) ISIS soldiers carry out mass executions of Shia Muslims in Iraq.

Shia Iran, even though they have been enormously weakened by the sanctions imposed on them by the international community, is perhaps the best located and equipped force to oppose ISIS in the region. While many have highlighted how the current deal lifting sanctions on Iran will result in the strengthening of Iranian backed terrorist groups like Hezbollah and Hamas, which is indeed a cause for concern, it will also give Iran more money to take up the fight against their genocidal enemy- ISIS. 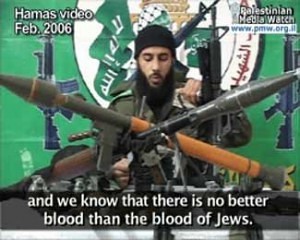 Because the Obama administration’s current efforts to destroy ISIS obviously are not working, the effects of this recent deal may (intentionally or not) work to provide a balancing effect in the region, with a stronger Shia Iran as a counter to a increasingly powerful Sunni ISIS. Consequently,  I was intrigued to see, in a recent essay for The Atlantic considering the deal with Iran, that Peter Beinart had similar thoughts.

“I agree that more money to Hezbollah and Hamas is bad. I think that’s the strongest objection to this deal,…But we can’t talk about Iran’s position in the region without acknowledging that today, the group most likely to commit another 9/11 on U.S. soil is ISIS. And Iran wants very badly to destroy ISIS, which is, after all, a genocidally anti-Shia group near their border. There are problems with Iran’s fight against ISIS, of course. It alienates the Iraqi Sunnis who we need to turn against the jihadis in their midst. But on the ground, Iran is the most potent force fighting ISIS—and if it has more money to do so, that’s not all bad. What’s more, if this deal makes it possible for the U.S. and Iran to coordinate their fight against ISIS more effectively, that’s good for American national security. And morally, if we can liberate the people who’ve been living under ISIS hell for the last year, that’s good too.”

But, like myself, Beinart recognizes the many potential problems from such a deal. He continues.

“To my mind, one of the biggest problems with much contemporary Beltway foreign-policy discourse is the refusal to prioritize, to accept that foreign policy sometimes requires working with the lesser evil, which is still really evil. From a national-security and moral perspective, ISIS is the greatest threat and Iran, like Stalin during World War II or China during the Cold War, is a highly problematic partner against it. But in terms of ability to project power, it’s the best partner we’ve got.”

It’s true that the U.S. government under Roosevelt had made a deal with Stalin, who murdered 20 million of his own people no less, in an effort to make an effective alliance against Nazi power in Europe. But the consequences of that decision, which helped preserve the Soviet Union against Nazi aggression, were significant, as in the wake of that war the U.S. and Soviet Union entered into a 45 year period of hostilities known as the Cold War, which saw conflict in Korea, Vietnam, and elsewhere, and nearly led to a nuclear war as a result of events in Cuba in 1962.

This leads to some important questions concerning the recent deal.

1. Is the strengthening of Iran to serve as a counter-balance to the growing power and influence of ISIS part of the strategic reasoning behind the Obama administration’s deal with Iran?

2. If so, is countering the power of ISIS now worth the risk of a strengthened Iranian influence in the Middle East?

Regarding the second question, there is simply no way to know. Only the future will tell.

There is also the question of exactly who, in a region where the United States is generally not popular, will benefit more from a closer alliance between Iran and the U.S.- ISIS or Iran? See ISIS to Benefit from Iran Nuclear Deal?