I first read Prof. Laurence W. Marvin’s The Occitan War: A Military and Political History of the Albigenian Crusade, 1209-1218 soon after it came out in 2008. I was still in graduate school at the University of Florida at the time and remember how formative it was on my understanding of the Albigensian Crusade, a topic I have otherwise not really studied in great depth as most of my research has since revolved around the First Crusade. I recall enjoying the book quite a bit, as did many reviewers at the time. Prof. David S. Bachrach, for example, referred to The Occitan War as a “benchmark for the writing of military and political history…” and noted that “all future discussions of the Albigensian Crusade will have to begin with this study.” 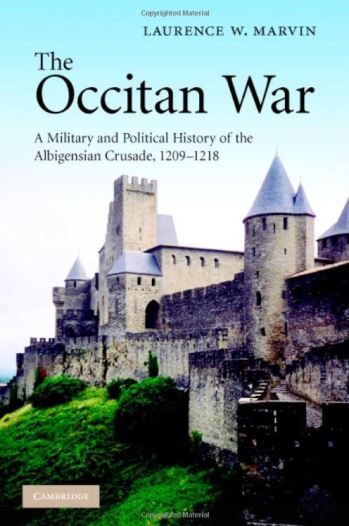 Fast forward roughly nine years later and I found myself composing a blog post on medieval historians and their military service. A mutual friend mentioned that Prof. Marvin had an interesting career in the military and that I should consider reaching out to him, which I did by email. Fortunately, Larry, as he now lets me call him, was interested enough to allow me to include his fascinating account of his four years of service as an enlisted man in the U.S. Navy working on a fast attack submarine! The account of his service, and that of other great medieval historians included in the piece, is well worth reading. Pushing my luck, I then bothered Larry once again about contributing to a blog post in which 34 medieval historians provided annotated lists of the “Most Important Books on the Crusades,” which Larry once again kindly contributed to. Lest Larry think he could then escape, Prof. John D. Hosler invited both of us to participate on a panel together at the annual meeting for the Society of Military History in Louisville Kentucky on April 6, 2018. This took place at a time when I served as an external member of a M.A. thesis committee at the University of North Florida for a student considering the Albigensian Crusade. Guess whose book on The Occitan War was an important element of that thesis?  END_OF_DOCUMENT_TOKEN_TO_BE_REPLACED

Above Images: (left to right) Professor Laurence Marvin of Berry College, Professor Patrick Geary of the Institute for Advanced Study, and Professor Florin Curta of the University of Florida.

When I was working on my Ph.D. in history, I believed that I was the only student in the graduate program at the University of Florida that had any military experience. I may have been wrong, but I was not aware of anyone else who had served. END_OF_DOCUMENT_TOKEN_TO_BE_REPLACED